Posted on March 1, 2015 by woolacombemortehoevoice

North Devon brothers William John and Thomas Henry Hill (pictured below) were two young volunteers who would sadly become victims of the first world war. Both are now commemorated on the Mortehoe war memorial, which stands in the grounds of St Mary Magdalene Church, Mortehoe. 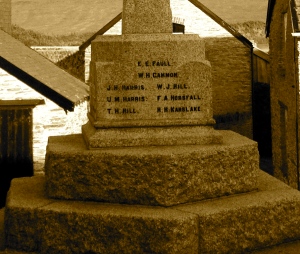 William John and Thomas Henry Hill lived in Mortehoe with their family. William Henry Hill, their father, was born in 1866 in Marwood, Devon and their mother Mary Hill (nee Bennett) was the daughter of William and Mary Bennett of Mortehoe. William Henry Hill and Mary Bennett would marry in 1891 in St Mary Magdalene Church, Mortehoe and would start their martial life living in the village at Dukes House, a small two up, two down house, sharing their home with a lodger, William Bryant, a 36 year old miner. On their marriage certificate William was working as a stonemason and Mary as a charwoman. In 1892 they had their first son, William John Hill, three years later in 1895 they had another son Thomas Henry Hill and the following year a daughter Rose Gertrude Hill.

The family were an integral part of the village. William Henry was a bell ringer at the Parish Church, (pictured below) something he would do for over forty years, chiming the bells at many village weddings and special services. Ringing out the old year and welcoming the new one in. Seven of the Mortehoe Bell ringers claimed to have established a record in regard to the length of their service, having rung the Mortehoe Parish Church bells for an average of 40 years per ringer. Mary was a member of the Mortehoe friend’s society (Pictured below) a group dedicated to raising money for good causes and arranging local events for the community. Mary was invaluable in arranging a number of charitable events in Mortehoe, and putting together plans for village gatherings.

By the time the 1901 census was taken the family are living at 2 Thorn Cottage, next door to William Henry’s In-laws, Mary’s parents, the Bennett’s. Ten years later when the next census is taken the Hill and Bennett family are living between the two properties. William John aged 15 is working with his father as a mason’s labourer, Thomas Henry is living with his grandparents next door working as a farm labourer and their only daughter Rose is employed as a domestic help. Little did they know what the coming years would have in store for this close knit family. As World War One broke out, both William and Thomas would make the 14 mile journey into Barnstaple to sign up for war service, leaving their family home in the small village they had grown up in to travel many miles to fight for their country.

Thomas and William both served with the 1/6th Devon regiment and would have enlisted at Barnstaple just after August 1914.

Acting Lance Corporal Thomas Henry Hill, reported missing, would never return to his family. The official record reads. “Death regarded 8/3 to 8/9/16.” However in a brief history of the battalion, written by a one-time Colonel of the 6th Battalion, it is recorded that he was wounded and reported missing on 8th March but subsequently reported as a Prisoner of War in Baghdad in August 1916. It must therefore be assumed that he died sometime thereafter in what must have been appalling prison conditions. News of his death would be reported in the North Devon Journal on the 4th March 1920.

His brother, William died in 1917. In common with every unit deployed in Mesopotamia, the 6th both witnessed the horrors of war in an unimaginably oppressive climate and fell victim to the resulting diseases. One of those who so suffered was Private William John Hill, who reportedly died of smallpox on 24th November 1917.

Rose Gertrude Hill was born on Wednesday 23rd September 1896 in Mortehoe, she would have been 18 years old in 1914 when her brothers, William John and Thomas Henry left for war, leaving her as the only remaining child of William and Mary Hill. Rose would remain living in Mortehoe, working as a domestic help, and would have been there as her family received news that William and Thomas had died. In April 1916, the family received further sad news, the death of Rose’s grandfather, Mary’s father, William Bennett, who was a greatly respected person in the village.

Happier times came in 1917 when Rose married William Moule, known to his friends as “Spurry”. The wedding took place at St Mary Magdalene Church on Wednesday 29th August 1917. William was serving in East Africa, and would have been on leave at the time of the wedding, following a short honeymoon he returned to active service, leaving his new bride in the village.

The wedding was recorded at the time in the local press:

“There was a large cogregation present at the Parish Church on Wednesday in last week to witness the marriage of Pte William Moule A.S.C youngest son of Mr & Mrs J Moule and Miss Rose Hill only daughter of Mr & Mrs W. H. Hill. The Rev T.F Daffan performed the service. The bride was led to the alter by her father who also subsequently gave her away. She was attended as bridesmaids by her cousins Miss Beatrice Huxtable and Lilly Robins. The bride & bridesmaids carried charming bouquets, the gifts of a friend. Mr G Overy of Barnstaple carried out the duty of “best man”. The happy pair were the receipents of many valuable & useful presents. The bridegroom recently returned from East Africa, after a short honeymoon Pte Moule will rejoin his unit.”

Following the war, William returned home to his wife Rose, and both would have been present in 1920 at the unveiling of the memorial in St Mary Magdalene Church grounds, the base of which was laid by William Henry Hill, the brothers father.

In 1923 Rose and William would have their first child, a son named Frederick John, a second son would arrive in 1927, Thomas Henry. (pictured below) The family remained in Mortehoe, living in Culver Cottage. William worked as a fishmonger, and in the 1930’s had a store in Barton Lane, Woolacombe. William continued the family tradition of bell ringing at the Parish Church; he would also spend much of his time showing caged birds, specifically canaries, helping to set up the Braunton and District Cage-Bird Society in 1945. William would attend many agricultural shows, picking up many 1st and 2nd prizes, he would even travel as far as Crystal Palace in 1948 where he won first prize in the Norwich Canary Section.

William died in 1951, leaving Rose, his widow heartbroken, her grandchildren recall her visiting her late husbands grave at the cemetery in Mortehoe most days, she would often call in to see them on her way home to Culver Park Lodge. Her grandchildren have fond memories of her being a kind lady. Rose died in 1966.

Category: People behind the Names, WW1