Posted on June 3, 2016 by woolacombemortehoevoice 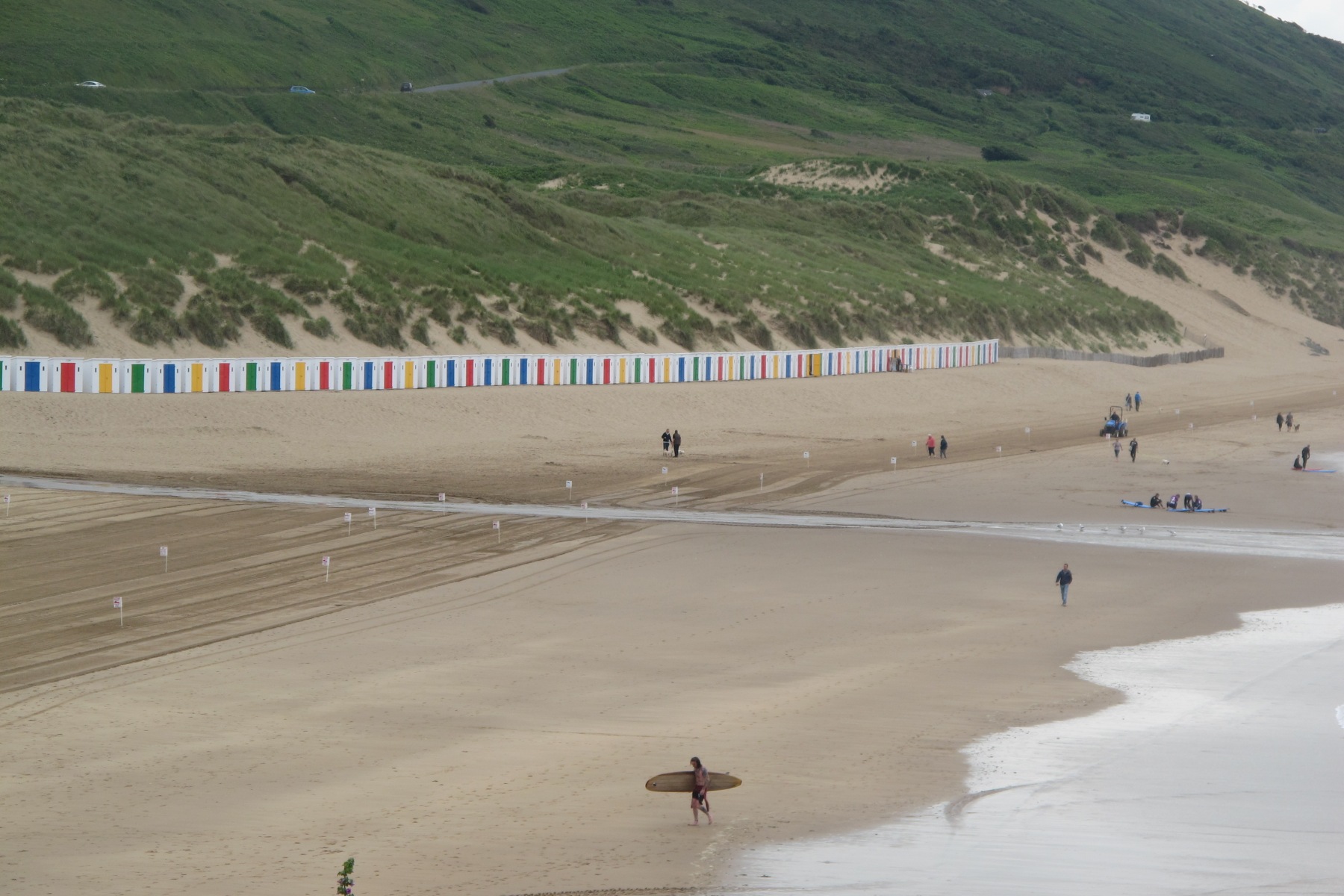 As I am for the greater part of the year moving rapidly about the English country – I always make it a rule to spend one month just pottering about the beach at Woolacombe. I choose Woolacombe because it is the home of my fathers, because its sand provide the best exercise ground for man, horse, and child that I know, and because it is equally easy to be sociable or solitary as the mood seizes you. But I never count my holiday as begun until I have crossed the Woolacombe stream. Several skins have to be sloughed before the holiday can really start. One skin is sloughed as I board the Atlantic Coast Express, another as I look down from the heights of Mortehoe Station over the deep combe below to the distant dim outline of Lundy, and a third as I put on my shorts and relaize that for a month at least I shall go tieless and neckless, and a fourth as I greet old habitues in the lane that leads down to the shore. But the fifth and final skin is not sloughed until after I have passed the notice “No motors allowed on the beach,” and the ugly barn which bears in white letters on its slate roof the words “Ye Olde Boat House Tea Rooms.” Here the lane ends and the sands begin. A solemn ritual of shoe-removing, as if at the approach of the hallowed ground, is observed by everybody just before the tiny bridge that spans the insignificant stream. Everyone walks on the sands barefoot. It is an odd thing, but in all its long life no one has yet carved his or her initials on the white painted handrails of this gateway to Paradise.

Above the bridge the shallow stream bed is festooned with old baskets and dented tin cans. Farther up the combe its banks are fringed with yellow musk. When I was a boy the scent from this musk used to permeate the lane with its thick, musty sweetness. The flowers still bloom, but the scent has almost gone. Below the bridge the stream becomes way ward and indecisive. Long before it reaches the sea it is absorbed by the sand but in fair weather, and when unmolested by damming children, it takes a more or less straight course. When the gale blows it curls like a hot iron in the hand of a blacksmith, and children are forever trying to divert it from its purpose by cutting new channels for it.

They and the gale between them often succeed in dissipating its energies into a wide a feckless delta, making an archipelago of sand islands separated by water about a millimetre in depth. This is no Rubicon to frighten event the most timid. Cinderella in her ball-room shoes could cross dry shod. And yet this absurd trickling stream acts as the Great Divide between two absolutely different worlds. I do not mean the merely snobbish worlds of the day trippers and the resident visitors, though that is strange enough. The day tourists from Ilfracombe or inland villages almost invariable stays on this side of the stream, contenting himself with the rocks and two or three hundred yards of sand that lie between the rocks and the stream. The regular visitor always avoids this congested area. He heaves a sigh of superior relief as he casts his shoes at the bridge and joins his own or other happy families assembled outside the line of a hundred white wooden huts, which are hired out for 25s a week. Everything that really matters happens on that side of the stream. Here the riders gallop past on their way to Putsborough, a couple of miles or more over the hard sands, at 6s an hour; here the red banner of the C.S.S.M (Children’s Special Service Mission) is flaunted bravely each morning above a pulpit of sand, and each afternoon by the touch line of a hockey or puddox match; here the smallest infants have their first donkey rides, and from here runs a never ending procession like bees from hives of surf bathers with their shining boards on their way to and from the sea. Once beyond the stream some magic wands seems to be waved, and our natures change. I am a great reader and fairly hard worker, but no book that I have ever taken over the bridge gets read. And my manuscript gets filled with sand, never with ink. I definitely suffer a sand change.

On this side of the bridge I am sober, adult, indeed rather grumpy. Once I have crossed the stream I cut capers, I sing quite regardless of the presence or absence of other men, I leap frog, I fly kites, I dig sandcastles, I join games and abandon them, I become completely irresponsible, I roll down sand hills, play pirate, smuggler, anything that’s going, and dread the moment when I have to pack away the surf-boards, kites, balls, spades, chairs, and bathing things, lock up the hut for the last time, and return to the world of men. I am not alone in this. Every night for the last week I have been one of the last, in spite of gale, blowing sand, cold and greyness, to leave the beach. But always there has been Elizabeth, loitering a little behind me, Elizabeth is twelve. This morning as I was going down I met her on the bridge coming up in floods of tears. Children contrive to hurt themselves a good deal even on the sands, so I was prepared to commiserate; perhaps even rub the hurt place well. “ I’ve got to go home,” she moaned. “It’s the end of the holiday. I can’t leave it. Oh I can’t leave it.” Those tears were the highest testimonial to the lure of Woolacombe and even I, after all these years of it, find parting from it no easier.

I grudge leaving it for a day, even to explore Exmoor, or for a wet afternoon shopping in Barnstaple. I am reluctant to leave it even at night to dance at Instow, because it means leaving the twinking, friendly lights of Hartland and Lundy, and the roar of the breakers on the beach. I will scramble over the high sand dunes behind the huts, and I will walk out to Morte Point of to the grand headland of Baggy because on these excursions I can keep Woolacombe always in view, and though I still feel angry with myself for allowing myself to be lured from the sand pit that I have dug in the very heart of the white hut-land, and envious of those who have had the good sense to stay there, I can still see the haven where I would be. I can get back to it. But when I climb out of the valley to Mortehoe and the train I am miserable. I know no other place that grapples me in this way to its heart with hooks of steel. It cannot be the whortleberries and rich cream, it certainly is not the weather. It is some mysterious way linked up with this stream, which appears to have neither source nor mouth, but yet acts whenever I cross it as a reminder that halcyon days lie on the farther side of it and the halcyon days are to be snatched while we can.